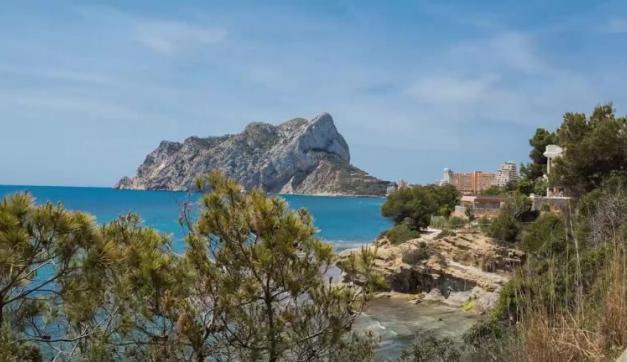 In the province of Alicante, the Mediterranean Sea covers almost 120 kilometres of white sand beaches, mountains by the sea and abrupt mountain ranges that slump over the waters. The cape San Antonio and cape Nao, in the north coast of the province of Alicante are the easternmost part of the Region of Valencia and the closest to the Balearic Islands. This stretch allows sailors to appreciate the Valencian coast in all its splendour, facing the steep cliffs in the Serra Gelada, the Peñón de Ifach and Montgó Natural Parks.

The lands on this stretch of coast in the province of Alicante share mountainous areas with a remarkable profile, peaceful sandy beaches and steep stretches of rocky cliffs. Under the water’s surface there are fabulous treasures that make this part of the coast unique. Inland, valleys and mountains, pure air and total tranquillity, from the heights of Aitana the mountains descend to the sea.

Byzantium made Dénia one of its episcopal sees and established a naval base there. It became even more important with the Arabs, who named it Daniya and separated Taifa from the Caliphate of Cordoba, making it the capital of a great kingdom that extended to the distant Andalusian lands of Jaen, and which stretched to the Balearic Islands and Sardinia. Presiding over everything was the Castle, whence everything could be observed, especially the port. Today, the fishing and merchant port, protected by long breakwaters from the Levante storms, welcomes the passenger lines that connect with the nearby Balearic Islands. It still preserves the charm of the old dockyards.

El Montgó, the mountain that guards Dénia’s rear and watches over the life of Xàbia, is, according to the locals, like a great sleeping turtle, with its head and legs tucked inside its shell. The truth is that this cave-riddled mountain, which saw human presence very early, is a magnificent watchtower over the Mediterranean; its near-800 metre height offers a wide, panoramic view of Alicante country and the Gulf of Valencia. Even on clear days, the profile of Ibiza can be glimpsed in the distance.

The Cabo de San Antonio is the border between the low and sandy coasts in the Gulf of Valencia and the high rocky cliffs on the north coast of Alicante. The ground swell from storms originating in different areas of the Gulf of Leon has created a unique ecosystem protected as a Marine Reserve due to its environmental, scientific and ecological interest.

Xàbia, surrounded by mythical capes, seems to have arisen from an old Arab farmhouse. It witnessed pirate attacks, as did the whole area, therefore it was fortified as its church reveals. Modern times have made it into a town dedicated to the sea which grew around its port where, from the 19th century onwards, the most diverse products were shipped, especially raisins. A series of crises strengthened its commitment to fishing, which today manifests as the fish market and that seafaring ambience of its whitewashed ground floor houses, which are grouped into narrow alleys. Its 15 kilometres of coastline full of cliffs, beaches and coves with crystal blue waters, make Xàbia a paradise for water sports.

Beyond the beaches, among pine forests, and a swarm of single-family houses, the paths zigzag in search of the Cape Nao, the most protruding headland on the entire coast of the Region of Valencia (excluding the Columbretes Islands), and which marks the boundary between the two gulfs, Valencia and Alicante. This is the so-called “coast of capes”, abrupt and stark, daring and beautiful.

The impressive lighthouse, surrounded by strong cliffs, rises about 120 metres and is an essential reference point for sailors. The verticality of the landscape  is absolute, only broken by small coves and the chilling view of a few tiny platforms hanging over the sea, which traditionally served as a storehouse and shelter for the residents of Benitatxell, who, by lowering themselves to them with rope, used their rods to extract from the sea their daily sustenance.

The town of Benitatxell timidly dips a toe in the world of tourism, somewhat remote from its spectacular coast, from a small elevation in the land; like its neighbours, it’s beautiful and tranquil. Teulada lies inland, in the shadow of the hexagonal tower of its church, where there is an undeniable agricultural tradition, the Muscat vineyards give its famous mistelle a reputation as sublime.

Moraira, which was a simple fishing village, penetrates the Mediterranean for almost a kilometre, and thus protects from northerly winds a series of coves and beaches that stretch along 5 km of coastline. At its port, the Moors embarked for Africa in 1609, just where its fishing fleet docks today and next to the marina. Benissa offers a privileged view over the Marina, with clean and well-maintained farmhouses, a sizeable church which in the region they call “the Cathedral of the Marina” and a richly-deserved reputation for its wines and sausages.

The unmistakable shape of the Peñón de Ifach appears in the south. The 324-metre-high rocky mass, which enters and challenges the sea, is undoubtedly the main hallmark of the Alicante and Spanish Mediterranean coastline. The distinguished botanist Antonio José Cavanilles, who in 1797 was sent by King Charles IV to study the natural charms of these and other lands, was the first scientist to come to this mountain. He compared it with “a ship attached to the mainland by its stern”. 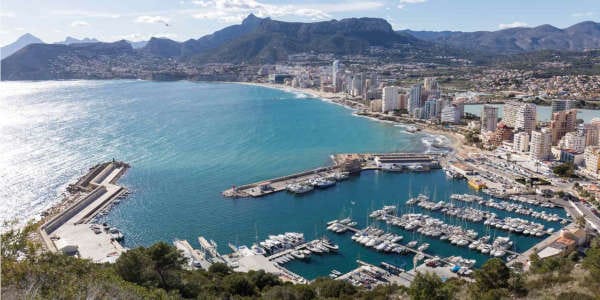 In Calpe, almost hidden by the mass of the Rock, the fishing port offers its own daily spectacle: the arrival of the vessels with their catch. The cove is enclosed by the imposing Morro de Toix, the last foothill of the Bérnia mountain range, before it plunges into the sea, another rocky outcrop that houses in its base one of this area’s sailing ports. This part of the Alicante coast is so vertical and rough that over a stretch several kilometres it remains wild and signs of civilisation are wholly absent. In the series of walls, large caves and tiny coves, only the long and decrepit stairs the local harvesters and fisherman used to descend from the top of the Sierra de Toix are, by some miracle, still standing. The area is the natural drain for the Mascarat ravine, a gap opened by the waters in the middle of the mountains. In the past it was essential to control it, since merchants had to pass through it as they transported their goods on horseback.