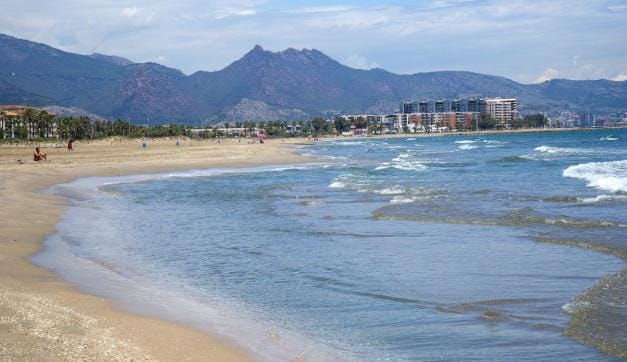 White sandy beaches are the anteroom of Oropesa del Mar. The narrow and steep streets, which are of Medieval origin, lead to the ruins of the walls and the castle. To the south, the coast becomes rugged and the cliffs finally smooth out at secluded beaches. Behind, there is the cosy silence of the Desert de Les Palmes. Here the word desert has an extraordinary sense as this is how the Discalced Carmelites named the faraway places they chose as a retreat, to dedicate themselves to contemplation and prayer. The sorrowful ruins of the primitive monastery have become one of the most charming and poetic places in these lands. In this coastal mountain range parallel to the coast, today a Natural Park, there are two ruined castles of Muslim origin and as many as 13 hermitages spread around the convent.

Benicàssim is the Biarritz of the Mediterranean. The Paseo Bernat Artola features the mansions they call the Corte Celestial, with an unexpected and unbelievable view of these beautiful late nineteenth-century residences facing the town’s golden beaches.

In Castellón de la Plana, the capital of this province, the Grao dockyard, the old trading shed, is one of the spaces that are part of the process of the city’s opening. But perhaps the singular setting and centrepiece of the town’s life is the Plaza Mayor, which contains the Fadrí, the bell tower that casts its 58-metre shadow on the vibrant market. Its eleven bells mark the passing of time in the town.

Almassora shyly looks out over the River Mijares, always recalling its Arabian origin, as its name clearly proclaims. Following the current of the river is the charming water wheel where water is collected each year to shelter an endless number of water birds. The Vila-Real was founded by the creator of the kingdom of Valencia, Jaume I. Its long Medieval history appears to be brushed aside by the economic importance gain by the orange cultivation, an industry that has completely changed the appearance of these lands. Then, although not discontinuing citriculture, ceramic companies were created, with some of the world’s leading companies. Tiles and oranges have made the Castellón area a roaring entrepreneurial success.

The old town of Burriana is notable for its church, an example of the first Valencian Gothic, and its lively fishing port. After Alquerías del Niño Perdido, you reach Mascarell, a little village lying outside Nules, with its rampart walls and its four crenellated towers surrounded by orange groves. Nules preserves the remains of an Arabian castle and, on the beach, the square tower of the lighthouse looks like a modern Cubist battlement. In Moncofa the land steals its space from the sea, the town lying in an impossible place, as if it were seeking the beauty between the eternal and the perishable.

The strategic geographical location of the Vall d’Uixó, at the foot of the last foothills of the Sierra de Espadán, compels all sort of the historical visitors to travel down there. Passing through the small village of San José, invites you to make a journey to the centre of the Earth, as if it were an adventure by Jules Verne to explore the hidden waters of the longest navigable underground river in Europe. After Xilxes, a tourist destination on the rise thanks to the quality of its beaches, the sea of the province of Castellón ends with the sight Almenara, a place full of history recalled in its historic town centre and in the inaccessible castle that yet looks over the town from its privileged location.