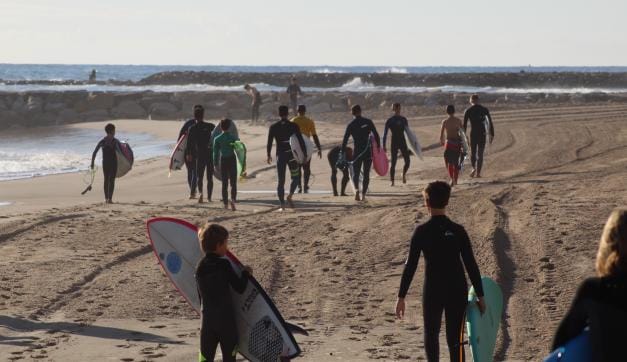 The natural beauty of the environment, anticipation and reward, are sensations you will experience the first moment you get on a surfboard. The Region of Valencia is an ideal place to start learning this discipline, thanks to its soft waves and warm waters.

Many companies offer introductory courses that use the following points as a practice area:

Alicante: Around Cabo de Huerta, in the area known as El Puntal, which has waves of between one and one-and-a-half metres on a sandy bottom and northerly winds. In the municipality of Villajoyosa, the El Centro spot is characterised by moderate winds and waves of up to two metres.

Castellón: Oropesa del Mar beach has sandy bottoms with waves of between one and one-and-a-half metres. At Peñíscola, the spot known as El Barranco has a rocky bottom and good quality waves, which are perfect for short boards.

Valencia: In this province the municipalities of El Perelló (El Chivas) and Alboraya (La Patacona beach) are noted for having sandy beaches with waves that usually range between one and one-and-a-half metres.

Here are some suggestions: