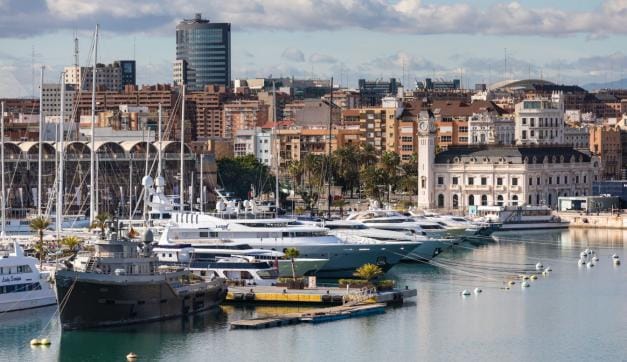 The 100 kilometres-coastline of the province of Valencia is a low, smooth coast, dominated by sandy beaches, dune systems, and wetlands full of vegetation and birds. It is in the centre of the Gulf of Valencia, where Valencia, the capital city of the Region of Valencia is located.

Marshlands and dunes struggle to survive in the northernmost tourist area of the province of Valencia. The Canet d’En Berenguer lighthouse is located inland, at the same point where a watchtower warned in the 15th century of the presence of privateers’ ships. From 30 metres above this lighthouse watched the coast and port and announced that one of the mythical cities of the Mediterranean was near.

Sagunto contemplates the silvery land and the Gulf of Valencia, from the hill that houses the old walls of its Islamic fortress. Today the two-thousand-year-old city still lies around the castle, which recalls all the peoples who benefit from such a privileged location. At the foot of the hill, the city houses the Roman theatre, which opened its 4,000-capacity stands. And as a vital expression of the energy of a city that never surrenders, there are the steep alleys of the Jewish quarter. This city of contrasts, ancient and modern, rural and urban, took centre stage again at the beginning of the 20th century.  It was then that the Sierra Menera Mining Company and, later, the Altos Hornos steel factory, were created to produce steel, lending the city a new atmosphere and opening the Port of Sagunto to the world. Today, the enormous blast furnace still stands in the Port as a reminder of the industrial boost; very much a symbol alongside the 13 kilometres promenade, an ideal showcase for the fine-sand beaches and clear waters and the marina sheltered in the mouth of the river Palancia.

Passing through farmhouses and marshlands, leaving behind the old Puçol Muslim house, among orange trees and vegetable gardens, there are two hills that break the plain of the horizon. There is where the Byzantine image of the Virgen del Puig was found. The story tells of when Jaime I set up camp here to prepare the conquest of Valencia, and in commemoration of the place where the kingdom of Valencia was forged, he founded the Santa María del Puig Monastery.

The sea is nearby and on the shore is La Pobla de Farnals, with its large marina, arranged into piers that emerge from the land in the form of a comb, beside the promenade. Blasco Ibáñez immortalised the life of the locals and their customs in his novel La Barraca, setting the action and its characters in the town of Alboraya. From Tavernes Blanques, the Lladró family, heirs to the ancient porcelain tradition, have brought to all and sundry an art that, until then, had been the heritage of very few. Very close to where their first rudimentary workshop was installed is the City of Porcelain, whose creations are exported worldwide. Next to the sea, in sight of the city of Valencia, is the beautiful Port Sa Playa complex.

And then we reach Valencia, the capital of this province and also of the Region of Valencia, a city that rises from the flames every year after being devoured by the roar of the mascletàs that boom out into the sky; this refers, of course, to their renowned patron saint’s festival, “Las Fallas”, recently declared a World Heritage Site by UNESCO. The ancient Valentia Edetanorum, founded in 138 BC by the Roman consul Junius Brutus, as a place to install his discharged soldiers, and later renamed Balansiya by the Arabs, has grown with the passage of nations and peoples into the cosmopolitan capital it is today.

The old city centre brings together and treasures its history. The Silk Exchange tells us stories of merchants, and of ships arriving from France, Italy and Flanders: it is undoubtedly the most beautiful Mediterranean fish market, and it, too, was declared a World Heritage Site. Opposite it are the Baroque church of Saints John and the modernism of the Central Market, which shows of the economic potential of the orchard. The narrow streets of the neighbourhoods of El Carmen and La Seu are a living example of that Medieval Valencia that contains traces of the old wall. There are two gates or Towers that stand out. Torres de Serranos, with its spectacular bridge, was an entry point for travellers from the “mountainous area” of Aragon and Catalonia; the Puerta de Quart was the place of arrival of those who came from Castille. The area around the Plaza de la Virgen, where the forum of the Roman city was, is today a series of Gothic and Renaissance palaces. The Basilica and the Cathedral, which houses the Chapel of the Holy Chalice, acknowledged by many as the authentic Grail used by Jesus Christ at the Last Supper are also located here.

Surrounding all this unique heritage lies the extensive garden of the river Túria, an old riverbed, part of the Túria Natural Park, that has become the largest green lung in the city and a favourite recreational area for the city’s inhabitants and visitors; it is part of the Túria Natural Park itself. The last stretch of this garden gives way to the imposing Ciutat de les Arts i les Ciències, which houses the second largest aquarium in the world, the Oceanogràfic. Closer to the sea, the surroundings of the Valencia Marina, with its seaside neighbourhoods and golden sand beaches, are a key area for tapas, paella and taking a stroll. Historical buildings such as the sheds, the Clock building or the old dry dock sit side-by-side on the Valencia dock, with the most avant-garde architectural styles such as the iconic Veles e Vents. Sailing is the star activity in this area, which was the venue in 2007 and 2010 for the oldest sailing competition in the world, the America’s Cup, when it hosted the 32nd and 33rd editions respectively. This competition brought together at the Valencia Marina the greatest number of participating teams in its more than a century-and-a-half of history. It was the first race to be held in Europe. The Marina currently offers an extensive range of sailing options, with more than 800 moorings and around 40 sailing services and activities companies.

The Valencian writer Blasco Ibáñez once said, “in the late afternoon, the deep, reddish paths of my country, bordered by orange trees that cut with their foliage the incandescent light of the sunset”. The great novelist was undoubtedly contemplating the dying day in the Albufera Natural Park, the great lake that adorns the city of Valencia, which wetlands and coastal bar or spit that constitutes El Saler meadow.