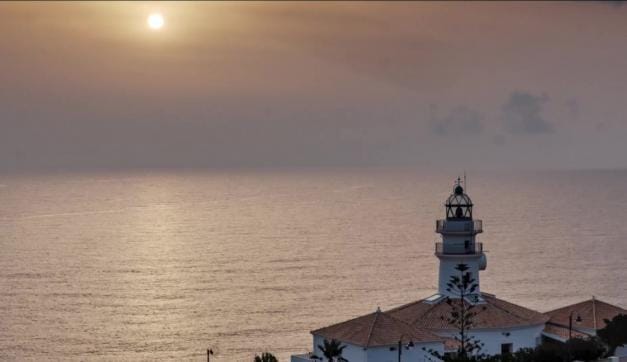 The region of the Valencian coast stretching from the immense plains that start from the edge of the Natural Park of l’Albufera to the not-so-distant Sierra de Corbera is known as the Ribera Baixa; on its land rice cultivation features prominently.

Leaving behind, the city of Valencia, you reach the coastal strip of Sueca (its Arabic name, Suayca, means small market), where El Perelló, an agricultural, fishing and tourist town, is located. Fine sand beaches and calm waters, good food, where the delicacies of the sea come directly to lie on the rice, and a beautiful and secluded marina that is the entrance to La Plana Lake is its appeal.

Cullera is dropped down the slopes of Mount Oro, the only stretch of cliffy coastline on the Valencia province. A meeting point for land and sea, Cullera fishes, grows rice and oranges that welcomes an increasing number of tourists. Lower down, next to the sea, the beach, pine forests, dunes and apartments. The marina has an original feature that distinguishes it from all the others on the Valencian coast: it is not a seaport but a river port, on the banks of the Júcar, approximately one-and-a-half miles from the sea.

Upstream, the capital of Ribera Alta, known as the island of the river Júcar, Alzira. The Almoravids made Al-Gezira-Xúcar an important town, a fully walled bastion, which had mosques, bathhouses and mills. Favara preserves the remains of its castle and a route over land and water that leads to Estany Gran, a small natural paradise. The Valldigna valley overlooks the sea along Tavernes beach. In Simat de la Valldigna an old mosque has been converted into the Santa Ana hermitage. The impressive and romantic ruins belong to the old Cistercian monastery built by the monks of Santes Creus.

Xàtiva is a standing history lesson, nestled in the foothills of an imposing hill, which serves as its backdrop: the mythical Penya Roja. At the top of the crest are the walls of the fortress that witnessed the entrance of, first, Hannibal, and later that of Scipio, in those times when Carthaginians and Romans began to dispute the hegemony of the known world over a question of borders. So important was Xàtiva that in the early 11th century the first paper mill in Europe was established there. Such was its magnificence that when, in 1244, Jaime I conquered it for the Christians, he kept its name, Xàtiva, which in classical Arabic means “the bride or absolute beauty”. In this “Spanish Avignon” two pontiffs, both members of the Borja family, were born; in the Papal States, their name would be Italianised and they would become the famous Borgias: Callistus III and his nephew Alexander VI. In this city, where the coexistence of peoples and ideas had always been exemplary, the Dominicans established a convent dedicated to the study of the Hebrew and Arabic languages; but the expulsions first of the Jews and later of the Moors was a crushing blow for commerce, agriculture, crafts and the life of the city itself.

In sight of the sea, Xeraco is a paradise, with mild winters, not very hot summers and heavy rain in autumn and winter. This is why irrigated agriculture, citrus fields and vegetable gardens cover a large share of its flat territory, which spreads over the La Safor region.

Gandía has reasons enough to boast of its past, its history and its heritage. The orange groves continue their ancient struggle with the mountains, occupying narrow valleys, trying to climb the slopes. Further down is “the kingdom of the marshland” and at the water’s edge, fine sandy beaches and clean, clear waters. Gandía was first made a Manor by Jaime I, before becoming a Royal Duchy in 1399. The new Duke of Gandía made this town his usual residence and created in it a little court, from which cultural figures such as Ausias March and Joanot Martorell emerged. Later, when Cardinal Rodrigo de Borja came on the scene, his fate changed. The future Pope Alexander VI acquired it in 1485 for his son Pedro Luis, thus beginning another new era of splendour. Those Borjas or Borgias, who wielded great power in the mundane and religious affairs of the time, merged with the city, which became a prosperous commercial centre, mainly due to the manufacture of silk and sugar. Today, the Ducal Palace, built on the remains of an old Arab mansion, reflects a time of splendour. The beaches frame the fishing port next to the mouth of the Serpis and a modern marina, which was constructed at the near end of the north dock.

Beaches of fine and clean sand, bordered over almost 10 kilometres by dunes, the only natural barrier between the sea and the orchard fields, lend Oliva a maritime landscape, which features all the tourist attractions you could hope for. Oliva is so discreet that it seems to keep its love affairs with Greeks, Romans and Arabs a secret...But it is so endearing that it can’t conceal the relationships revealed in the vestiges of its architecture and in the customs of its people. You only have to visit its Moorish neighbourhood of Raval to find history come to life. Be amazed by the Pego-Oliva Natural Park, a wet, almost flat area, the water is flooded, bringing the wetland fauna and flora to life.

This can be the end or the beginning of your journey along the coast of the province of Valencia. A stopover for the birds, which as evening falls take shelter under its protection, again to take flight at dawn. Memories of the Moors are felt in the Pego valley, while the Mediterranean continues to bring to life this country which has been home to so many civilisations.

More tourist information about nautic destinations in the province of València: www.valenciaturisme.org