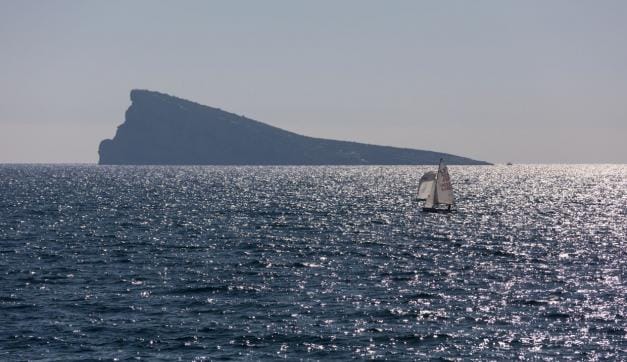 No one has yet been able to explain it; some say it was its light, others that the calm with which time passes in this corner of the Mediterranean. The fact is that Altea, almost inadvertently, went from being a little sailortown, perched on a hill overlooking the sea, to become a refuge for artists in the sixties and seventies. Painters, sculptors, musicians and writers from around the world sought inspiration under the shelter of its church’s glazed ceramic dome. The town boasts, perched as it is on a hill, which ascends steep slopes and little alleys, of being the best viewpoint to see the region of La Marina.

The small coastal mountain range, the Serra Gelada, rises between the Albir beach and the Rincón de Loix. The mountain that juts out into the sea, forming escarpments and large cliffs, is one of the Region of Valencia’s natural parks.

Benidorm is located here, a city that can be enjoyed all the year round, since it offers the one of the best microclimates in the European Mediterranean, with fine sand beaches and superbly clear waters. Benidorm is both a great city and a big village. Its grandeur today is almost a miracle when you think that in 1950 it had only around 2,700 inhabitants, many of whom spent much of the year working on the high seas. Punta Canfali, an emblematic image of the city, is the centre of its old town. Pleasure craft are moored alongside the little fishing port, ready to go in search of close horizons.

Legend attributes the proximity of an island, the so-called Benidorm Island, to a blow from the sword of the legendary knight Roldán, on the nearby and visible peak of Puig Campana. It is easy docking made this stretch of coastline very vulnerable from the sea, where the dangers of pirates and Berbers came from. Today the island is an underwater refuge for protected species and a treasure trove for divers who come to see them.

Not far from the tourist emporium is another magical place: the old fortress of El Castell de Guadalest, a privileged enclave, perched on the cliffs that rise above the valley. The Muslim town preserves the narrow alleyways and the zigzagging path that leads to a centuries-old gate which, having been excavated from the same rock, gives access to the historic and impregnable fortress that stands on the most vertical part of the rocky cliffs.

Finestrat is an old Muslim farmhouse, in the middle of a pure Mediterranean landscape, which is almost intact. This is a town marked by hills covered with pine, almond, olive and carob trees, enlivened by small orchards where orange, pomegranate and medlar trees flourish. Its unique orography starts from an altitude of zero metres on its beaches, to more than a thousand on the impressive Puig Campana, all in less than 10 kilometres.

We close this stage with a gem, La Vila Joiosa, with its delightful, colourful streets full of houses painted in all colours, with its sailortown at the outskirts and with the style of palm trees that accompanies the mouth of the river Amadorio. The old town, enclosed behind the wall, developed around the church but always liked to remain open to the sea. Fishermen and sailors converge at the port, the former with the reality of their catch, the latter with the dream of new voyages. It was the link with the overseas routes that brought cocoa here, which became the foundation for the formidable chocolate industry in La Vila Joiosa.