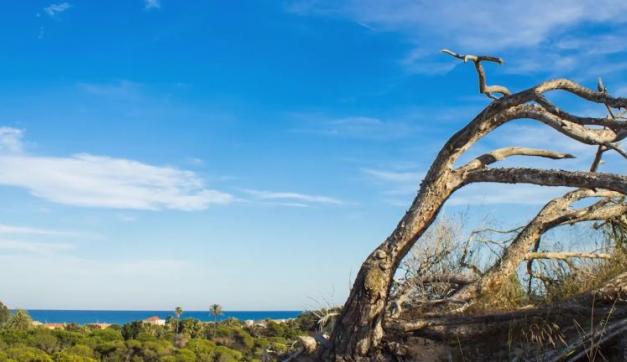 At the southern end of the Region of Valencia, in the province of Alicante, there are extensive fine sandy beaches with dune systems, coves and inlets. Sailing under the shelter of watchtowers, you can visit floating museums and resources associated with the sea and salt.

Before it became independent, Santa Pola, which sits in a bay protected from easterly winds by the mountain range named after it, it was the Puerta de Elche; it was for good reason that the Romans called this fortified settlement Portus Illicitanus, which was built as a bastion against pirate raids. But its eternal calling was always the seas and from very early on its inhabitants left behind evidence of their Mediterranean calling, as shown by the Roman house and salting factory. The castle-fortress, the nerve centre of the town, which today houses the Archaeological and Fishing museum, bears witness to its military past. As do the defensive towers, which were the coast’s watch points. Almost 15 kilometres of beaches and coves guarantee happiness for thousands of holidaymakers who yearn all year round for these clear, crystalline waters.

The current Santa Pola Salt Lakes formerly formed a large wetland area known as the Elche´s albufera (coastal lagoon), which covered almost this entire plain. Today the salt lakes are a natural park, which still play an important industrial role; they are the paradise of flamingos, as they come here in up to 8 000 animals’ colonies.

The beautiful fortified island of Nueva Tabarca is within sight. Although it officially belongs to the municipality of Alicante, this Illa Plana is closer to the coast of Santa Pola, the departure point for the “swallows” covering the barely three miles that separate them. These 43 hectares of land, in the middle of the sea, have been inhabited for barely two hundred years, but they have been two centuries of constant struggle and survival. Today, the seabed that surrounds the island is a Marine Reserve that safeguards its enormous natural wealth: large Posidonia oceanica grasslands, which foster the existence of all kinds of fish, such as barracudas, groupers, white seabreams, painted combers, common pandoras and octopuses.

The river Segura flows into Guardamar, which is drained by the mills that impede its passage. One date fundamentally marked the history of Guardamar del Segura, which is old: it saw Iberian settlements and the passage of the Arabs, as its name shows. In 1829 a strong earthquake struck the town, which was located within a walled area and around a castle. Nothing was left of the Medieval town and a new urban space had to be created. Life was moved closer to the coast, on the gentle slope that fell into the sea. Since then, it is the coastal dunes that have offered a culture of their own, an authentic Mediterranean forest that runs parallel to the coast.

On the way to Torrevieja, another treasure of these lands is the La Mata Salt Lakes, where the remains of a Roman jetty were found, and the Torrevieja salt lakes, about 3 metres below sea level. A lagoon complex that changes colour according to the light and season. But, besides, this magical place of pinkish waters is key to feeding the one hundred bird families recorded, which is a real treasure. Some stop their journey to Africa while others winter here. Perhaps the most attractive is the pink flamingo, which uses the salt lakes to rest and feed during its migratory journey.

The sea and the salt have marked the destiny of Torrevieja. The port bears witness to the best of its history, since it was the home port of the most important fleet of sailing ships in the Mediterranean, until the 19th century, and preserved the last of them and the most recent testimonies of the sailors, who plied all the seas of the five continents. Today, around a million tonnes of salt continue to be exported from its dock, making it the main producer in Europe. Cuba was always a good market for Torrevieja salt, hence the Havanan atmosphere that flows in the air, of which its International Habaneras Contest is a reminder.

Orihuela, surrounded by a fertile orchard, looks out at the sea from afar. And as a gift for visitors, it receives them with a superb palm grove. Its streets and squares show its cultural level and its status as a calm, wise, orchard-filled and modern city. Its heritage is endless: convents, palaces, stately mansions, shrines, churches, public libraries ...

This voyage along the coast of the Region of Valencia, as far as its southern end, finishes at Pilar de la Horadada. Or starts, because everything is a never-ending game made of different routes and paths. Everything here depends on the coastline: the population, citizens, industry, tourism, leisure; a land of about ten kilometres that stretches between the residential areas of Las Mil Palmeras and the Escull del Mojón, already in the territory of Murcia.