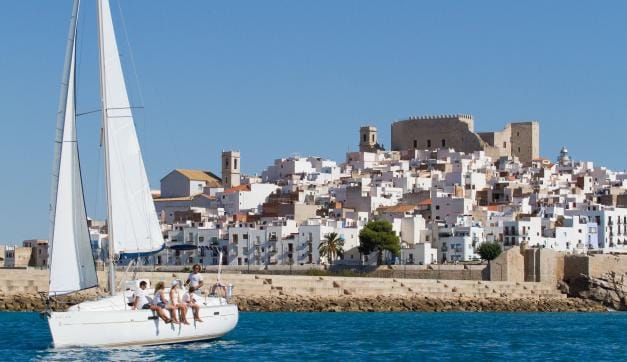 Let’s travel along the first stretch of the nautical settings of the Region of Valencia. We will make a journey to cover 600 kilometres of coastline, from north to south, exploring first the landscape and the province of Castellón. Then we will visit the province of Valencia, and we will end the journey arriving the coast of the province of Alicante, better known as the Costa Blanca. Welcome aboard. Let’s set sail!!!

The name Costa Azahar covers the entire province of Castellón, the northernmost of those that make up the old Kingdom of Valencia. On its mere 120 kilometres of coastline, there are fine and warm beaches, rugged and beautiful coves, bathed by the calm waters of a sea that is now considered a classic thank you to the old seamen. Inland, lush pine and holm oak forests and immense orange groves, with villages and towns overlooking the sea.

Columbretes. Each people who sailed in these latitudes gave a name to this maremagnum of islands and islets, the work of the fury of the volcanoes. They make reference to the many reptiles that, alone, inhabited them; they were lands of serpents, snakes and scorpions. Later they became a refuge for pirates and smugglers, a safe and feared place that offered refuge from the storms and a place to hide from coastal surveillance. Below the water line, nature shows its magnificence: an almost non-existent Mediterranean. Underwater life takes refuge in the cracks and hollows of this marine reserve, which is also a natural park.

As far as Vinaròs, ships from all over arrive in search of good food, a quiet and serene life and stress-free leisure. There are those who suggest that Benicarló has always looked not so much at the sea as at its orchard and its artichokes, which with good reason have a designation of origin. It became so important in the Mediterranean that in the 16th century large ships were built at its shipyards.

The great fort of Peñíscola, a seat of the Templars and residence of Benedict XIII, who went down in history as Pope Luna, casts its shadow on the sea from its high coast. Here the moon winds through medieval alleys and mysterious gardens, is tinged with blues and golds and whispers to the future among the battlements of the hotels and in the sand of the beaches. At the centre of the Serra d’Irta Natural Park, raises the Xivert castle, and not far away is the notable second-century tower of Alcalà de Xivert; it boasts to be one of the most beautiful bell towers in the Region of Valencia. Part of its population moved to the flatter lands on the coast, forming Alcossebre, a destination full of playful and magical spots. Next to the De las Fuentes beach, where fresh water runs through the sand, is its marina.

Further south, the Cap i Corb tower watches over the tomato plants of the Alcossebreña district and how the life of the coastal area of fine sand of Torrenostra, in the municipality of Torreblanca, go past. Doña Blanca, a descendant of the conqueror Jaime I, gave her name to a defensive tower, with which this town is forever identified. Its peaceful landscape is a gorgeous parade of blossoming almond trees, small cultivated fields, and the lagoons populated by birds and spectacular sunsets; it belongs to the Prat de Cabanes-Torreblanca Natural Park, a small example of Mediterranean coastal marshland. Its old drainage channels flow into the Gola del Trenc, on the way to the fossil dunes and wild beaches that surround Torre de la Sal, a peaceful coastal town in the neighbouring municipality of Cabanes. Its attractive town centre, located inland, is worth visiting to stroll through its Medieval alleys.