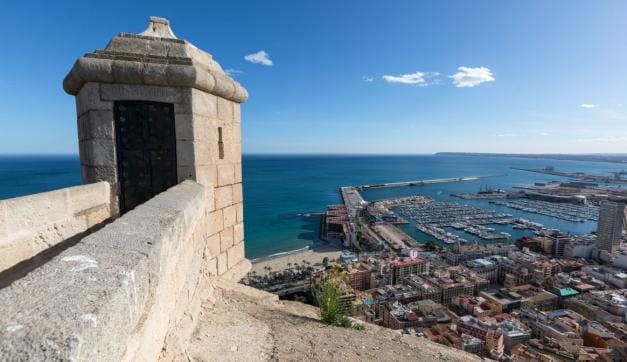 While further north the garbí, that wind that rises at noon and, rolling west, fades with the sunset, is king, in these lands the libeccio breeze. The mythical “sirocco”, which is very hot in summer and of a moderate temperature in winter, comes from the southwest, and strolls as if it were in its own home between the Cape Nao and the Cape Gata, in Almería. They say that it is associated with so-called “Saharan” dust storms, which influences the life cycle of the flora and fauna of the coastal wetlands and whose presence is partially offset by westerly and easterly winds that make sailing easy.

Such goodness ensured that all the peoples who set sail on the Mediterranean made land here: Phoenicians, Greeks, Carthaginians, Romans, and later Arabs came here in search of new trade routes and added their culture to the mix, thus shaping the character of peoples and towns.

Our tour of the central coasts of the province of Alicante begins in the heart of the orchard, by the sea. San Joan d’Alacant preserves the watchtowers that protected the coast from those Berbers eager for the wealth of a place that had grown prosperous due to its agriculture. Today it is a tourist centre, like El Campello, which traces its roots to the cultures of the Iberians and Romans. The small fishing village has developed a modern spirit, with a peculiar physiognomy where features and customs of the city are confused and mixed with those of a little village, and where the traditional and authentic are obvious in every detail. The Yacht Club and the marina are the standouts on the 23 kilometres of Campello coastline.

Around Mutxamel the orchard is a badge of identity. An orchard surrounded by unirrigated land, marked by religious myths, full of tradition and an enterprising attitude to the future. Inland, in the town of Busot, on the southern slopes of the mountain, is one of the best-preserved secrets in the region, the Canelobre Caves.

Its privileged location, between the mountains and the sea, lends Alicante its special beauty. They say the city smells of the sea, that it knows it’s a sailor and that it has always acted as such. Its history has been written over many a long century: all the peoples who have passed through have left their mark. Despite so many vicissitudes, the character of the city, with three thousand years of history, is what has always made it a port city, which at the same was a military stronghold. It was that of Alicante, the natural port of Castilla, which led to an active maritime trade, which brought a great economic flourishing and a demographic boom that made it the third commercial city in Spain.

The town of Elx is adorned with the largest palm grove in Europe; more than five hundred thousand of them survive time in this plantation, which is a World Heritage Site. Elche stretches across a plain. The old Iberian settlement, in the Alcudia area, were mentioned by Ptolemy and Diodorus, but it was the Arabs who moved the town to the place it now occupies and surrounded it with palm trees. The Hondo Natural Park is hidden very close to the town centre, as if it wished to conceal its secret beauty; more than 2,000 hectares of reedbeds and rushes grow between a beautiful marsh overlooked by palms and eucalyptus.