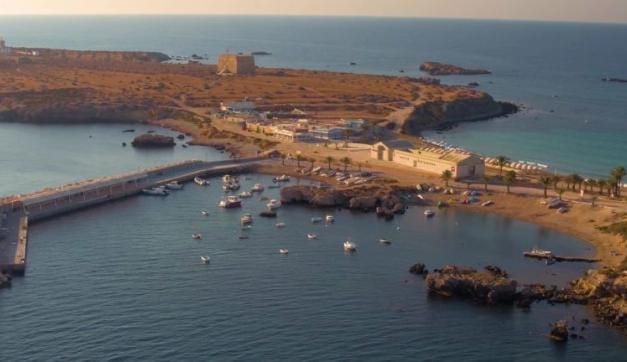 Tabarca is the only inhabited island in the Region of Valencia and was the first Marine Reserve to be declared in Spain, in 1986. The variety of its marine landscapes and the fact that it is one of the few current examples of military architecture on the Spanish coast, make it an idyllic setting for lovers of sailing and aquatic activities.

Only three miles from Santa Pola and eight from the city of Alicante is this little archipelago formed by the island of Nueva Tabarca and the islets of La Cantera, La Galera and La Nao and numerous reefs (Negre, Roig, Cap del moro, Sabata and Naveta). Its elongated shape (1,800m long and 400m wide at its widest) and NW-SE orientation makes for a jagged coastline, with small cliffs and a sandy beach located in the area of the isthmus.

In Tabarca the waters are crystal clear, reaching visibilities of between 22 and 45 metres, which allows for especially rich biological communities and makes the area an important breeding ground for pelagic species. Extensive Posidonia oceanica meadows surround the entire perimeter of Tabarca at depths of between 0 and 30 metres, which, on top of the water’s excellent clarity, it guarantees really amazing snorkelling sessions.

The name Tabarca speaks of its origin. The first settlers to colonise this island were people of Genoese origin rescued by the Spanish crown from Algerian captivity in the final third of the 18th century, and whose origin may be found on its namesake, Tabarka Island, off the coast of Tunisia. Alongside the new inhabitants, a military detachment was assigned to the island to defend it against seaborne incursions. The population reached one thousand inhabitants in the 19th century. There is currently a permanent winter population of about 50 people, which rises tenfold in summer It’s recommended you schedule your visit for spring or autumn so you can enjoy the magic tranquility of this island.

Once you arrive in Tabarca, the little village of San Pedro and San Pablo is a must-visit, with its walled citadel dating to the era Charles III, declared today a Historical-Artistic Site and a Place of Cultural Interest. In the Almadraba building, the New Tabarca Museum contributes making known the remarkable natural and cultural heritage of Tabarca, of the peoples for whom the sea was their main ally in their struggle to survive.

As you stroll through its streets, you’ll be astonished by the seafood cuisine on offer, in which the popular caldero, a fish-and-rice dish, is a highlight. Beyond the walls, in the area called Campo, is the defensive tower of San José, which was a prison in the 19th century. There is also a lighthouse at the eastern end of the island.

The marine reserve has an official fish ranger service that patrols with support vessels. Due to its status as a protected natural space, it is essential, before sailing to the island, you look up the requirements for visiting, anchoring and going ashore. If you don’t have your own vessel, the boats known as “tabarqueras” offer regular transport to the island from the nearby port of Santa Pola and, in summer, from the port of Alicante.