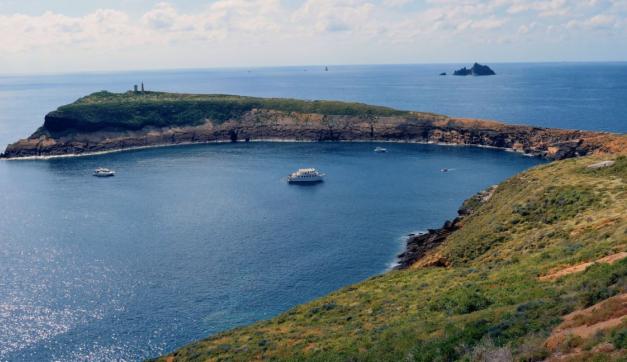 Welcome to the Columbretes Islands, one of the most emblematic places for sea lovers, though still unknown to many. This Natural Park, which is also a Marine Reserve, is located about 30 nautical miles from the city of Castellón de la Plana or from Alcalà de Xivert (Alcossebre).

This protected nature reserve marked its 30th anniversary in 2018. It consists of a set of four groups of islands and islets of volcanic origin. You can access these islands with your own vessel or with one from nautical tourism companies; it will take 2 to 3 hours of motor sailing. The nearest mainland ports are Alcalà de Xivert, Oropesa and Castellón.

Due to the vulnerability of the island’s’ environment, only the largest island, l’Illa Grossa, can be visited only in small groups and always accompanied by the Reserve’s rangers, who explain the most important aspects of the place. The route is linear and begins at the stairs carved into the rock that lead from the port to the lighthouse, passing through the visitor centre, which houses an interesting exhibition on human history and fishing around Las Columbretes. During the journey, and depending on the time of year, we can observe numerous birds, including seabirds, as well as lizards, insects and the most representative plants, always surrounded by the omnipresent and beautiful Mediterranean.

It is important to remember here that visitors who wish to discover the island should follow a series of recommendations to interfere as little as possible with the fragile ecosystem. Therefore, you cannot visit the islands on your own and it is not possible to book in advance. Once on land, you must follow the visit’s itinerary; you must not step on the rock to access the sea, nor smoke or eat (lunch is served on the boat). Since the island has no bar service, we recommend that you always go ashore with drinking water, sun protection and covered footwear. Though free diving is allowed, diving with a tank is restricted, so we recommend getting in touch with authorised diving centres (the closest are at Oropesa, Alcalà de Xivert and Castellón), which will make all the arrangements so you can dive in comfort. You can spend the night on the islands but it must be on the sailing boats that spend the night moored in the bay. As it is a Marine Reserve and Natural Park, we recommend you look up the requirements for visiting, anchoring and going ashore.

A little bit of history: the first mention of Las Columbretes appears in the book Geographica, written by Strabo in the first century B.C., cited as the Ophiusa Islands in allusion to the number of snakes that inhabited the islets. Two centuries later, Pliny and Mela gave the islands the Latin name Colubraria, a forerunner to their current name. From the 16th century, work began on the lighthouse and with it came the first lighthouse keepers, who with their families would inhabit the building until 1975, when it was automated. From that era, besides the lighthouse, there is a cemetery, the cottages where the lighthouse keepers live today, an image of Our Lady of Mount Carmel and the remains of orchards, tackle blocks and stone stairs leading to the sea.

Despite the many species that have over the course of history, only those that have adapted to extreme conditions including aridity, salinity, drought or storms have managed to survive. Six marine species regularly nest on its volcanic cliffs (Andouin’s gull, tufted cormorant, Cory’s shearwater, yellowlegged gull, storm-petrel and Eleonora’s hawk), and throughout the year the islands are frequented by more than two-hundred-and-thirty species of migratory birds.

The large number of fish in Columbretes waters, such as groupers and corvinas or shi drums and their passivity in the face of human presence are striking thanks to the regulation of fishing. The richness of the algae on the seabed around Las Columbretes is also a sign of the quality of the water and the protection of the environment. In the vicinity of the Islands you can also enjoy the presence of bottlenose dolphins, barracudas and sun fish. Occasionally large cetaceans such as the fin whale can be observed.

The Nature Reserve has an information centre located in the Castellón Planetarium which is equipped with a permanent exhibition on the most important cultural and natural aspects of the islands. There is also a visitor centre located on the islands.

You can learn more about this beautiful Natural Park and Marine Reserve at: Columbretes Islands Interpretation Centre (Castellón Planetarium): parque_columbretes@gva.es

Here we show you some of the experiences that will allow you to enjoy this beautiful corner of the Region of Valencia: